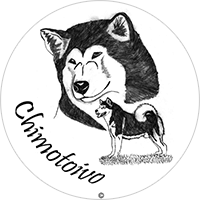 Here we will try to provide you with more information on our kennel and the breed ‘the Alaskan Malamute’. We started our kennel in 2014, that year we got the approval for our kennel name which we are registered at KMSH and FCI. To the Alaskan Malamute however, we are familiar with for some time now. Both of us grew up with snowdogs, so we have experience with these dogs.

All our dogs are healthy and are checked regularly by a veterinarian. The dogs used for breeding are tested on HD and ED as well as an examination of the eyes is an absolute necessity. We are trying to breed dogs with stable and gentle characters. We ourselves love to take our dogs on a walk, without them being offensive or aggressive to anyone. We also try to retain the proper bodytype with same the work ethic of earlier. The breed standard is also a great help with this.

Our dogs are a part of the family and spend quite some time of the day with us indoors.

In a nutshell:
We try to breed strong and healthy dogs with soft, stable characters, with no aggression, nicely built, cheerful, taking into account their original task.

The meaning of Chimotoivo:
The name comes from Chimo (Inuit: “I am a friend”) and Toivo (Inuit: “snow”). Merging these two Inuit words seemed the perfect name for the kennel. 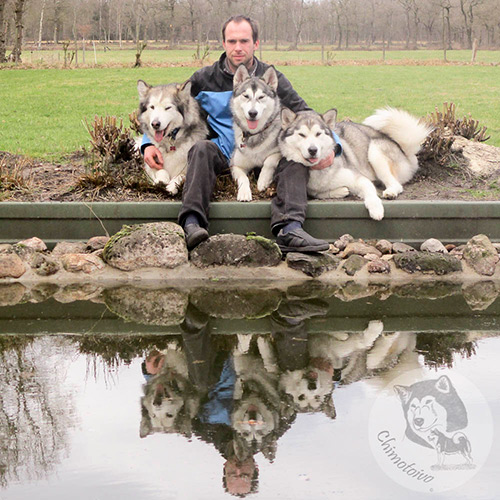 Tom grew up in Lokeren where he lived among the animals in the countryside. On this farm he had, among other things, a Siberian Husky. Since 2013 he lives with Whitney in Ertvelde, where he also met the Alaskan Malamute breed by Whitney. The Malamute spoke something more than the Husky because of their character, appearance and construction. A few years later the idea came up to breed with this fantastic breed, but as it should and not just to multiply the breed. Breeding is much more for him than just puppies. Working with the malamute requires a lot of attention just like other primitive types, but you get so much in return. After getting to know the sport, he was completely sold: working together with them in the wild in all circumstances is a different feeling. By giving respect and friendship to the malamute, they also want to go through a fire for their boss ... The desire to participate in competitions has grown, still under the idea: taking part is more important than winning. The sport is purely for the fun where the podium places are fun, but not a requirement. Living together with the dogs in this way also counts as a podium place. Whitney is the one who assists him in this, ensures that the dogs get the appropriate feed on time and allowed them to keep the dogs that are not running in the span. 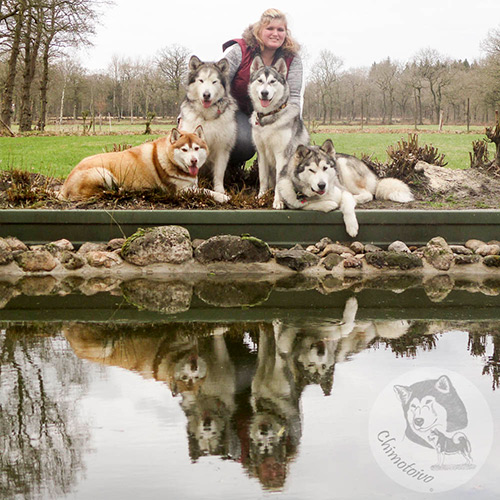 Whitney grew up in Sint Gillis Waas among the many animals she had with her parents. She stayed as a child with her grandmother who previously bred with the German Shepherd. By going with her to the dog school she also got to know the Samoyed, which was her first dog with whom she did weekly training. She has got to know her the primitive types and the pleasure to work with them. She learned a lot from this breed. When she left the parental home she also had to say goodbye to the samoyed, but after a while she missed the company. By searching in breed characteristics, there were 2 breeds that claimed her even more than the white, always smiling dog; the Siberian Husky and the Alaskan Malamute. By getting to know Tom with shortly afterwards the idea to breed with the Alaskan Malamute, she could pick up the thread of the past with the show event where her passion lies. Not only the show appeals to her, but also the preparations: washing, combing, etc. of the fantastic roommates. These preparations start their lives very early in the dogs; she goes with them from baby to dog school and ring training for obedience and socialization. By being so busy and living together with them, it is not 'our dogs', but our children. 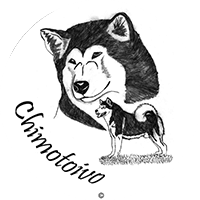 We try to breed strong and healthy dogs with soft, stable characters without aggression that are nicely built, with a keen eye for their original task.